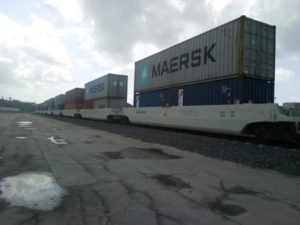 Double stack containers leave the port of Mombasa to Nairobi.

One of the key challenges that the new infrastructure project hopes to manage is the universal logistics challenge that is the redirection and return of empty containers.

It is estimated that the empty container conundrum costs the global container shipping industry around $20 billion per year – approximately 40% of total handling costs. Put another way, analysts at the Boston Consulting Group estimate that empty container movements across the globe accounted for:

Naturally, things are no better for West Africa’s port terminal operators. Exacerbating the problem is the cynical “dumping” of containers that just manage to reach the end of their work life, as they arrive in west African ports – making it impossible for terminals to reposition the containers through normal container shipping routes. 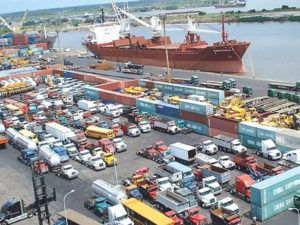 Road and Traffic Congestion in the Port of Lagos.

Last year Nigeria’s Port Authority suspended the Lagos-based operations of Maersk Line, Cosco Shipping, Africa Port Services and Lagos & Niger Shipping Agencies for ten days, due to unacceptable congestion in the port brought about by a failure of the companies to provide adequate storage for empty containers.

In Cote d’Ivoire studies have shown that as far back as 2006, 1/3 of all containers that left the Port of Abidjan were empty. There analysts have proposed greater co-ordination and development of the agro-processing and export sector to  transform bulk carrier and export models to take advantage of the potential to export via empty containers.

In Egypt, NileDutch has deployed algorithms that have improved their container use forecast by 25% as they seek to rationalise their repositioining costs by 15%.

The empty container repositioning problem is certainly understudied in West Africa, despite the fact that it is Africa’s busiest shipping region. Pwc has estimated, in an instructive report, that US$2.2 billion p.a. could be saved in logistics costs if the average throughput at the major ports in Sub-Saharan Africa is doubled – indicating not only that investment in port infrastructure prior to reaching TEU capacity is not only good for local economies, but customers and trade as well. Part of the investment must undeniably be focused on managing dwell times, as well as empty container management systems.