Mobicrane is a leading supplier of lifting equipment to the mining, oil and gas service industries in Ghana and the wider region. Paterson Simons, the dealers for Manitowoc Grove amongst others, recently handed over a GMK6400 (400MT), Manitowoc Grove’s flagship model, to Mobicrane at Manitowoc Grove in Wilhelmshaven, Germany. This is not only the largest new mobile crane ever sold by Paterson Simons, but it will also be the first GMK6400 in Africa, testament to the high standard of lifting equipment now required by customers and end users in the region. To ensure seamless on-the-ground service Paterson Simons sent a senior engineer to Germany for GMK6400 specific rigging and diagnostic training and further training has been conducted in Ghana by trainers from the factory. 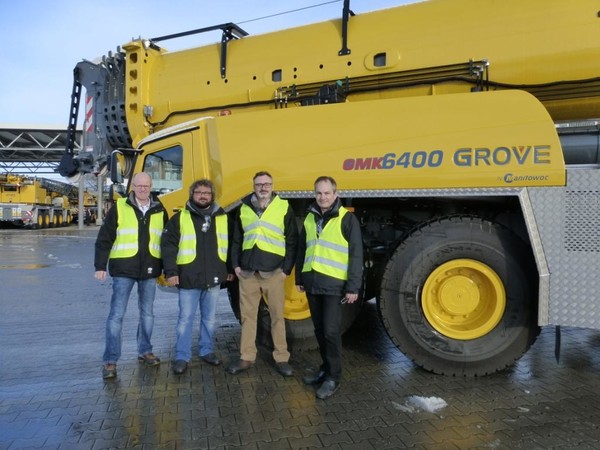 The GMK6400 replaces a very special crane in the Mobicrane fleet, so special in fact she has come to be called “The OId Lady”. A 1966 Manitowoc Vicon 3900T Model (140t), The Old Lady, Ghana’s largest crane until 2005, was used in the construction of the Aboudzi Thermal Plant in Takoradi, amongst many others.  Mobicrane purchased her in 1999 and she went on to become the flagship of their fleet performing lifts all over the region and neighbouring countries. Why is she called “The Old Lady”? Mr. Domloge explains: “She is called ‘The Old Lady’ because every time she had to be mobilized to work, everyone dropped what they were doing to assist and escort her because she moved at a stately pace; but she always got to where she needed to be, and got the job done. A very strong lady indeed.”

After many years of outstanding service the 3900T was retired in 2010, and will regrettably soon be recycled for scrap. The GMK 6400 has large shoes to fill, but as Manitowoc’s flagship model is no doubt the ideal machine to do it; well documented as the strongest 6-axle crane on the market the new models are awash with many small product improvements such as retractable access ladders on the superstructure, swaged end termination for hoist ropes, symmetrical counterweight blocks, improved decals and advisories. Many options now also have standard reversing cameras and a boom hoist camera. Mobicrane’s investment in the GMK 6400 demonstrates that customers and end-users in the region are increasingly demanding a very the high standard of lifting equipment. 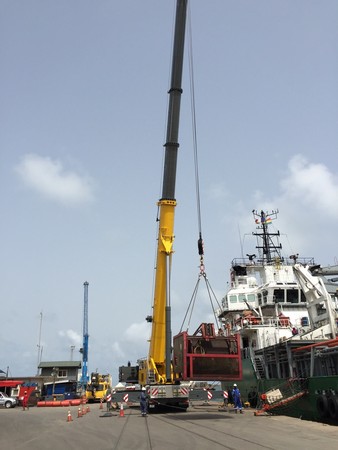 The machine’s first lift occurred at the Takoradi Commercial harbour on 21 March, 2015 where the crane was hired by Tullow Oil to lift a 45t winch unit, using a 95t counter weight. Mr Domloge concludes: “I felt like a proud Father.”