The multi-purpose facility will include a new 1.4-kilometre quay for four container berths with 16-metre draft and a 3.85-kilometre breakwater within a dredged port access channel, 19-meter-deep and 250-metre wide to accommodate larger vessels.

MPS already runs parts of the existing terminal and is owned by a consortium of shareholders, among which is the Bolloré Group, a French conglomerate, one of the 500 largest companies in the world and Africa’s biggest ports and logistics operator.

Tema is the most important entry port in Ghana, handling around 70% of Ghana’s total maritime cargo; the expansion project aims to bring its capacity from 1 million 20-foot equivalent containers (TEUs) to 3.5 million TEUs, all designed to 2015 standards.

The award of the contract followed an extensive bidding process which yielded seven bids, the shortlisted bids came following a competitive tender issued by the GPHA in March 2013, which included detailed engineering, financial, and construction criteria.

MPS were ultimately awarded the expansion contract, and the tender phase was completed by the signing of an amendment to the existing concession agreement on Friday 12 June between MPS and the GPHA.

Mugni, an energy and infrastructure partner, said: “This project marks a significant and historical turning point for Ghana as a real economic force for both West Africa and the sub-Saharan region as a whole. We are very proud to have assisted MPS and the Bolloré Group in bringing about this transformational infrastructure project to support Ghana’s commercial growth and we look forward to providing further support on the development of the project, which will create a world class infrastructure.” 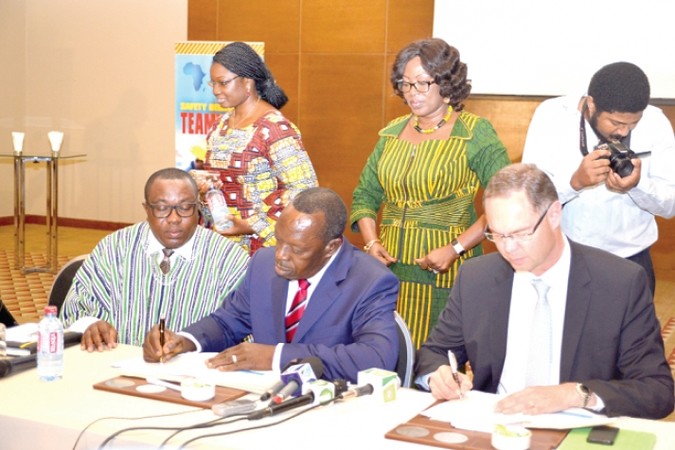 Mr Anamoo(middle) and Mr Fejfer signing the agreement. With them is Mr Samuel Ofosu Ampofo (left) and the Minister of Transport, Mrs Dzifa Attivor (behind).