In a touching, yet festive event RAM spreaders says, “Farewell” to their iconic founder.

Complete with a James-bond themed arrival of the guest of honour, the event at the Hotel Atlantic Kempinski in Hamburg saw guests from near and far pay tribute to a true spreader pioneer.

Robert joined the family engineering business soon after garduating from Liverpool Technical College in the Department of Welding Engineering. After completing two years of the welding course, he was awarded the Tiberman Prize for Welding by the Welding Institute, due to the highest marks achieved countrywide in the end of year exams. Robert quickly excelled and establishing himself as a well sought-after steel fabricator and welding engineer in and around Liverpool, with a constant flow of work coming in which was built on both his own reputation, that of his father and the family business.

Due to his specialised welding knowledge of aluminium Robert was often on board ships repairing aluminium lifeboats and even welding the hull of a Royal Navy minesweeper. His specialised welding covered many different types of materials from steel, through cast iron, copper, stainless steel and aluminium. From 1967 the first containers started to arrive in Liverpool often on-board general cargo ships. This resulted in Robert building a mobile workshop fully equipped for all types of welding and other processes required for on-site repairs to containers and other specialised work. The vehicle even contained an electric oven, kettle and most importantly a two way VHF radio for keeping in contact when on site. Robert explains “The shipping lines found that the cost of repairs carried out by their normal ship repair companies to be expensive due to the restrictive practices carried out in the shipping industry at that time. They wanted a competitive and fast service, which Ed Mills & Sons provided.”

In 1972, with Robert’s knowledge and his experience enabled him to build his first container spreader. This was due to his understanding of the weaknesses in the designs of equipment he had repaired since 1967. In 1972 a 40ft semi-automatic spreader was urgently required by a customer in Belfast, Ireland, who operated short sea shipping services across the Irish Sea. The normal supplier wanted 8 to 12 weeks to produce the spreader, but the customer required it in two weeks. Robert took up the challenge and the new spreader was delivered to the customer in two weeks.

BELOW: Robert with his father, late John Edward Mills 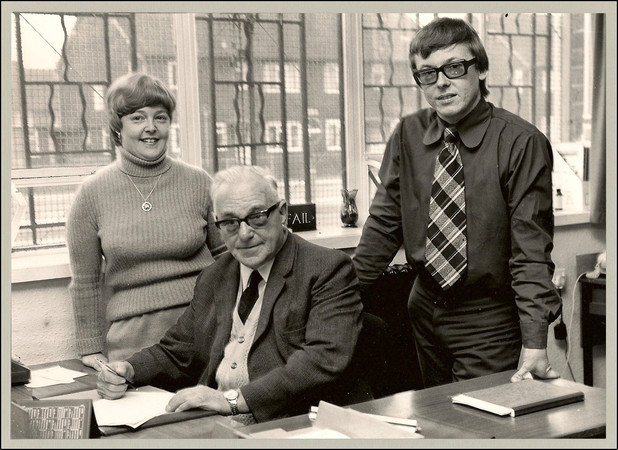 By 1985 Robert began building the first of a family of telescopic spreaders suitable for all applications resulting in 1986, the building of his first telescopic spreader for a QC crane – in answer to the wish from the Port of Felixstowe! During this period Robert began using the brand name of RAM Spreaders which was taken from the initials of his name. In 1990, due to the growth in the number of telescopic spreaders being manufactured, the company took advantage of a DTI scheme (Department of Trade and Industry) for a stand at the SingaPort 90 Exhibition in Singapore. Robert attended the Exhibition, and during the visit met a representative of NatSteel Engineering Pte Ltd (NSE), and so began the relationship that would, two years later, result in a new joint venture and the creation of NatSteel Engineering (UK) Ltd and with it, the new spreader department in Singapore and the UK.

Reflecting on his well deserved retirement, Robert’s hobbies keep him busy with still a keen interest in steam locomotives and model railways. Robert still has that passion and commitment in whatever he sets his heart to, and believes he is still no different to the person he was over the years dealing with developments of container spreaders. Robert explains “I am very proud of all that has happened but fully realise that while I may have been the person that originally planted a handful of acorns that turned into a forest of oak trees, without the company and the dedicated team of people in the RAM family none of what has happened would have been possible”.