Huge sums of money are being ploughed into West Africa’s ports, and not before time, but will a regional hub on this part of the continent emerge?

The past five years have seen many ports along the West Africa coast transformed, as private investment has led to the development of modern container terminals, the acquisition of new equipment and the dredging of deeper access channels and berths. These moves have helped trigger a significant increase in cargo volumes and allowed shipowners and operators to deploy larger ships and take advantage of better economies of scale when serving the region. On trades to/from Asia, vessels in the 3,000 to 5,000 TEU size range are commonplace, with MSC phasing in even bigger 6,000 to 7,000 TEU ships. 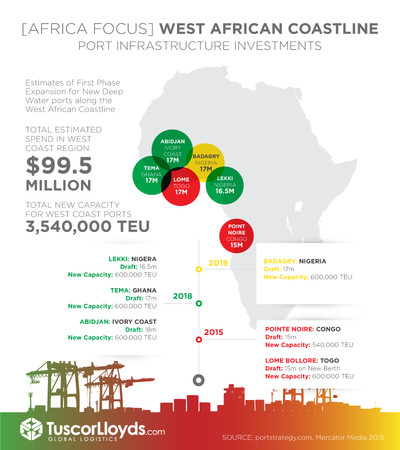 ABOVE: An infographic released by shipping agents and freight forwarders Tuscor Lloyds shows the total amount of investment which has been piled into West Africa’s ports, as well as the total new TEU capacity.(Apologies for low resolution).

Currently, there are two ‘TEU millionaire’ ports along the coast – Lagos and Luanda, which handled 1.6M and 1M TEU, respectively, last year – but several more are expected to exceed this milestone within the next three years. Nonetheless, a natural transhipment hub located in West Africa has not emerged. Indeed, many carriers still use South Africa’s Ngqura and Durban, Algeciras, Valencia and/or Tanger-Med (Morocco) in the Mediterranean Basin as their distribution hubs. Lomé Container Terminal (LCT) in Togo, and various developments taking place in the Democratic Republic of Congo, Ghana and Nigeria could change this situation. Moreover, the Canary Islands hopes to rekindle its role as a hub for West Africa, with a major plan by the Port Authority of Santa Cruz de Tenerife to develop a new port at Granadilla. LCT, is partly owned by Terminal Investments Ltd, a company in which Geneva-based MSC owns 70% of the equity. With this level of control in a market where ports’ and terminals’ stevedoring services and cargo handling operations can still be quite unreliable, and where it is very expensive for large mainline ships to be held up, MSC has implemented a hub-and-spoke programme, based on the facility. A series of feeder services now connect ports, such as Abidjan, Cotonou, Douala, Lagos, Libreville, and the Ghanaian ports of Tema and Takoradi, with LCT and MSC’s main services to/from Asia. The ongoing development programme for LCT will probably see this network extended further. From 2017, LCT will feature 1,054m of quay, with depths alongside of 15.5m, a 54-ha yard and the capacity to handle 2.2M TEU/year.

TIL’s is not the only large development taking place in Lomé with Bolloré Africa Logistics (BAL) continuing to invest in its facility. Recent months have seen the company phase into operation nine new reach stackers, 22 terminal tractors and two mobile harbour cranes. Two STS cranes will be delivered later this year, as BAL gears up the terminal to handle in excess of 1M TEU/year. This compares with its existing capacity of about 350,000 TEU/year. “Our goal is to continue investing in our handling equipment and in the skills and expertise of our teams, to increase our performance and returns, both on the old platform [Mole 2] and on the new third wharf,” explained Charles Kokouvi Gafan, chairman and CEO of Togo Terminal. Elsewhere, the huge port complexes planned in Lagos, Nigeria, have the potential to change the market. Badagry, which is fronted by APM Terminals (APMT), and Lekki, in which Manila-based ICTSI has the operating concession, have initial phases that will each bring at least 600,000 TEU of additional container handling capacity into the region. While Lekki is due to open in late 2018/19, Badagry is expected to follow a year later. Other large scale projects are also planned in Nigeria, with new ports being developed at Ibom and Olokola. 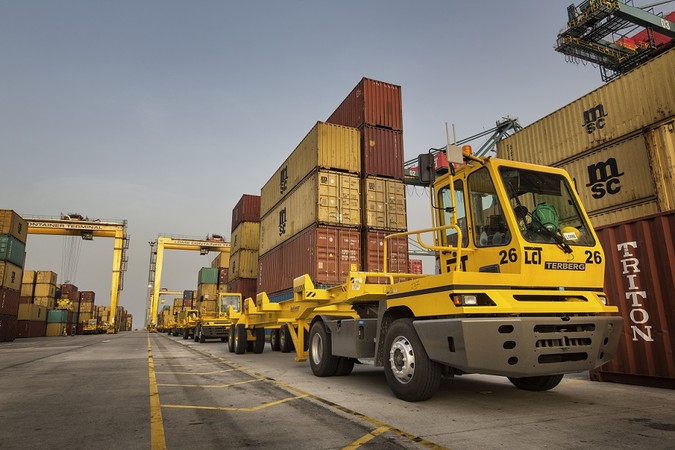 ABOVE: A new fleet of Terberg Tractors await containers at LCT, Togo.

APMT is also involved in a huge development at Tema, Ghana. Along with BAL and the Ghana Ports and Harbour Authority (GPHA), the global port management group is a shareholder in Meridian Port Services, which is planning to invest over US$1.5B in a new 3.5M TEU terminal. A new breakwater will be built and the access channel will be dredged to 16m for the fourberth facility. According to Kim Fejfer, CEO of APMT, the new terminal will be capable of handling the largest containerships in service, and will potentially transform Ghana’s economy. “Increased access to global markets is a key component of Africa’s ongoing economic growth, and this new world-class development will help put Ghana and all of West Africa at the forefront of global trade,” said Fejfer. Mohamed Samara, CEO of Meridian, added: “Tema is being expanded and we are going to use superior equipment and advanced and modern technology in this development. It will allow Ghanaian companies to compete for business in the most cost-effective way.” 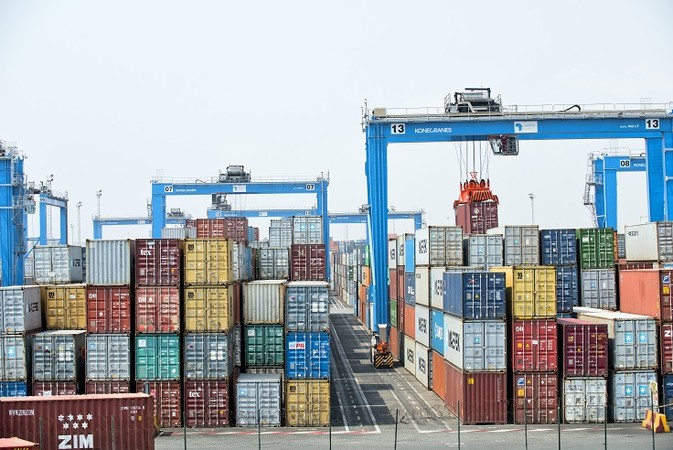 The existing Meridian-managed terminal is operating very close to capacity and handled in excess of 650,000 TEU in 2014. According to Fejfer, the new capacity will present “great opportunities for us in the transhipment sector, particularly in the Gulf of Guinea”. Fejfer said that when the new terminal opened in 2018, the current facility would be returned to the GPHA and used to handle other cargoes, including breakbulk and ro-ro/vehicle traffic. Takoradi, which is Ghana’s other port is also being transformed, as new quays and cargo handling capacity are developed. In particular, investment is focused on the offshore oil and gas supply sector. But it is not all about building large-scale ports with the potential to also process transhipment cargo. West Africa’s coastline is dotted with ports, and in many of them projects are in place to expand, re-equip and modernise existing facilities, as a means of relieving congestion and putting in place the necessary capacity to handle the growing local cargo base. In most cases, the work is being undertaken in conjunction with landside improvement programmes, as many ports also have a role as gateways for landlocked nations in Africa, or at least aspire to handling this cargo.

Significant developments completed in the past 12 months and/ or underway include:

In smaller countries, such as Cape Verde, the government recently issued “expression of interest” documents as part of its plan to encourage investment in its main ports, including Boavista, Mindelo, Palmeira and Praia. The plan is to encourage private investment into the ports and to improve their operating efficiency with a view to extending their cargo hinterlands. West Africa’s port are coming of age and it is a matter of when, not if, a hub port evolves.